When it comes to germ hotspots, we think we know where the germiest areas in the workplace are. Our mind usually drifts to the toilet seat – however, the number of germs that can spread on things like keyboards, soap dispensers and door handles may shock you.

Since the beginning of the Covid-19 pandemic, people globally have been reassessing their hygiene routines. We all wash our hands more thoroughly and frequently, and there has been a focus on how to clean our workplaces properly in order to prevent the spread of germs and viruses.

Throughout any workplace, there are a number of different touchpoints that are used frequently every day, by countless amounts of individuals. It’s important to be aware of where these touchpoints are, and how to limit the spread of bacteria from them.

When we think of germs, we automatically go straight to the bathroom. However, the office itself is just as germy as the washroom.

Unfortunately, keyboards and desks are essential to productivity in office spaces. These are touchpoints that cannot be eliminated; therefore, they must be cleaned (and cleaned properly).

In hospitality environments, employees will be fully aware of the germs that exist in their kitchens and how to tackle these. However, where a kitchen is installed in an office environment, employees may not be aware of best practices, or what kind of bacteria may be lurking there.

Even though a small office kitchen may not be used to prepare and cook meals from scratch every day, it can still harbour a lot of bacteria and general dirt. Microwaves are often used to heat up lunches, and kettles to make tea and coffee. Fridges are often stocked with multiple cartons of milk and containers of food, so it’s no wonder that germs begin to build up here.

A study from the University of Arizona revealed that the microwave itself is one of the dirtiest places in any office as a whole. A kettle handle could harbour as many as 2,482 germs.

Therefore, it’s important to enforce strict kitchen cleaning rules in the workplace. Encourage staff not only to clean up after themselves, but before themselves, too. Again, place antibacterial wipes, or a spray and some cloths, in the kitchen to allow employees to clean things before and after they use them. A little cleaning goes a long way.

The washroom is, understandably, one of the workplace’s dirtiest areas. Washrooms have countless users every day and have multiple touchpoints within them – most of which are unavoidable. We pick up most germs with our hands, and considering we have to touch taps, soap dispensers and door handles within the bathroom, it’s no surprise that we can pick up many germs here.

Additionally, washrooms provide the perfect environment for germs not only to grow, but to thrive. They are a moist environment with lots of traffic, and the more users a bathroom has, the more bacteria that will grow there.

One of the only ways to limit the germs transmitted in a bathroom is to wash hands thoroughly. Washing hands properly can help to reduce the spread of respiratory illnesses like the cold by 21%. However, personal hygiene can only be controlled to an extent, and as much as we’d like to believe that everyone washes their hands properly at work, studies have shown that only 60% of people wash their hands properly after using the bathroom. To try to increase this number, install signs around the bathroom to remind people. It’s also important to make sure that your bathroom is fully stocked with the equipment necessary – such as soap and paper towels.

Aside from encouraging handwashing, you can try to limit the number of touchpoints for bacteria to cling to in a bathroom. Touchless dispensers are a good place to start. Hand dryers should also be operated by a sensor where possible, as should taps.

The other main touchpoint in the washroom is the door. Where possible, with good planning the door itself could be removed entirely. However, this isn’t possible in some spaces, and to manage this you should place a touch-free sanitiser dispenser by the door to encourage staff members to remove any remaining germs on their hands.

In addition to this, an infographic produced by Kimberly-Clark Professional as part of their Healthy Workplace Project revealed that with over 20,000 germs per square inch, the average office desk has 400 times more germs than toilet seats. So when you’re working hard, your immune system clearly is too! 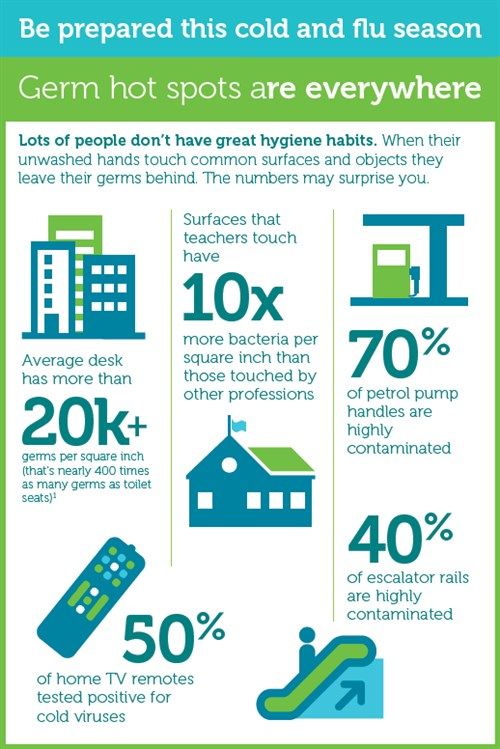 But just in case you weren’t convinced, here are yet 10 more things that have been found to be dirtier than a toilet seat. Prepare to be shocked!

10 surprising things that have more germs than a toilet seat:

Protecting yourself from germs in public places

Even if you still can’t bring yourself to stop covering the toilet seat with paper before you sit, here’s something to consider: it can actually make germs more likely to come into contact with your skin.

That’s because toilet seats are designed to prevent bacteria from spreading in the first place. They have smooth, rounded plastic surfaces that make it difficult for germs to attach to them. In fact, Professor Val Curtis from the London School of Hygiene and Tropical Medicine told The Huffington Post UK that any bacteria living on a toilet seat would most likely be “dead” within an hour.

On the other hand, toilet tissue is absorbent and is kept next to the toilet – which makes it more likely to absorb germs from the air when the toilets are flushed. So when you sit down on toilet paper, you’re exposing yourself to more bacteria – although it’s incredibly unlikely that you’ll get sick from a toilet seat, whether it’s lined with toilet tissue or not.

On the whole, you’d be better off following our tips on how to protect yourself from germs in public washrooms, which include practicing good hand washing techniques.

If all of this has got you thinking about improving your cleaning routine, take a read of our article about the powers of biological cleaning products.

8 thoughts on “Germs Hot Spots: Are You Looking At The Right Places?”

This site uses Akismet to reduce spam. Learn how your comment data is processed.